In the ‘80s and ‘90s it was common to hear teenagers and young adults use words like gnarly, tubular, and rad. Now we use words like finna, highkey, and Karen. Every generation develops their own slang but with the help of the internet young generations have now created almost an entire language, impossible to learn except through immersion. An adult listening in on a conversation between teens and young adults might sometimes miss phrases or words. Are these kids really speaking proper English? Yes they are!

Language, specifically spoken word, is an ever changing thing. Words have specific meanings because of the way we use them colloquially. If we all collectively use them in a different context and it is understood, then it can be adopted as correct. Nowadays when a new word or phrase is introduced it can spread incredibly fast, often globally, because of social media and the internet. It evolves so quickly and distinctly within age groups that I am not familiar with new slang used by high school aged kids, just a few years younger than myself. We have assigned new meaning to common words like chill, same, flex, cap, salty, extra, drip, and tea and have come up with completely new words like swole, finna, highkey, lowkey, simp, yeet, TL;DR, etc.

Slang arguably lets us communicate faster and more efficiently with our peers. We have an intricate network of words and sayings that have meaning applied to them based on their original context; which can be anything from memes, Vines, Tik-Toks, movie references, or even tweets. Everyone knows iconic Vines such as, “This bitch empty. Yeet!” and “It’s a watermelon, inside a watermelon!” These are paired with the visuals and audio so we have automatic associations and connections when hearing them spoken. We have even managed to come up with a way to portray sass through written text, something linguists have struggled with for years, by typing in randomized upper-case and lower-case. PreTTy ImPrESsiVE rIGHt?

To many people, slang is also a tie to their culture and history. Like languages, slang changes based on location and who is using it. AAVE (African-American Vernacular English) is a dialect with its own grammar, vocabulary and accent features spoken mainly by working class African Americans. Terms such as woke, ratchet, slay, and on fleek are all examples of words that originated in AAVE. To Black Americans the use of this slang is part of their cultural identity, however, many see it as an uneducated form of speaking, which is a stigma that needs to be broken.

Using words like lit or yeet does not mean that younger generations are uneducated or lacking in language skills, we have simply created our own ways of communicating, and I think that’s amazing. When someone is bilingual they often think and speak a little bit differently in each language. This is much like switching in and out of slang when around friends or in a formal environment.

There is a time and place for everything and that includes slang, but we all need to accept it for what it is, an impressive linguistic feat, and if you don’t like it just wait a few years, it’ll change. 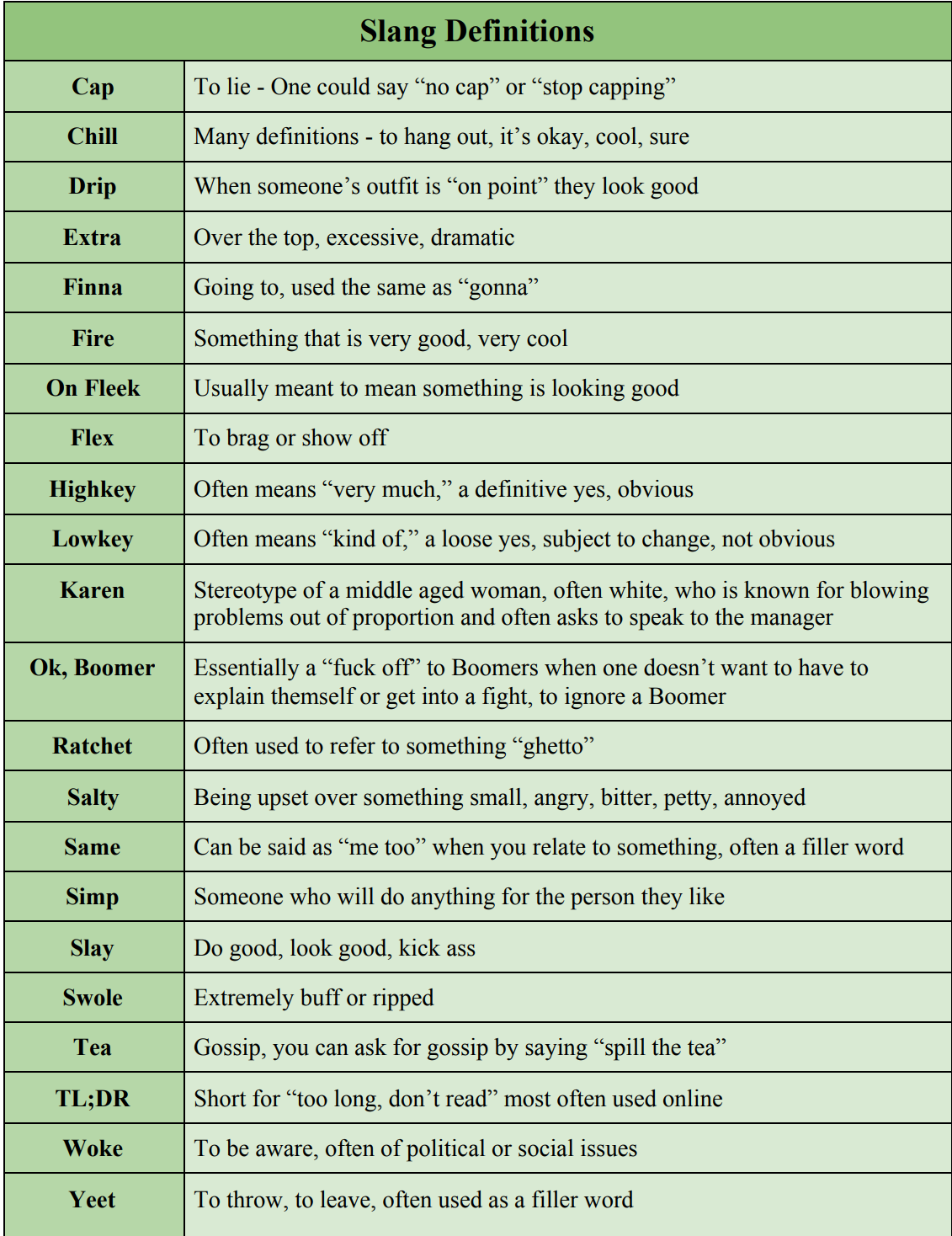