The Rabbit Hole of Words

An Interview with Amanda Callendrier 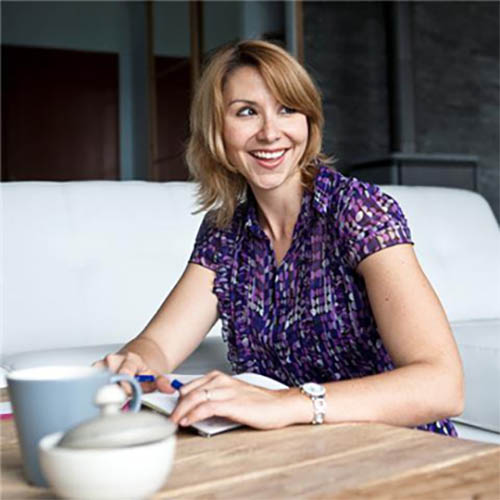 “I don’t care what anybody thinks about my writing, but my shoes, that’s really nice,” Amanda laughs at herself.

Amanda Callendrier is an academic advisor as well as composition and creative writing professor at Webster Geneva. She’s also working towards a doctorate and is a published author. In 2017 she released her debut novel Camino Beach. She studied English and French before ending up at Webster, almost accidentally, after falling in love with a French man. “Life happens and you just have to go with it, but you also have to be open to it,” she adds.

Amanda is inarguably one of the coolest professors on campus. She sits down for the interview rocking Puma sneakers, skinny jeans, and a bright red fluffy jacket. It’s very bold, and I’m a little jealous. She turns in her chair and chuckles, the wall of books behind her in the Webster learning center is composed almost entirely of her own collection. She even grabs one to take back home with her. For Amanda, creativity and storytelling, in all its forms, is everything.

“I think people who write or do creative things just always did. You don’t know when you started because you just always do it,” she says, reminiscing on childhood. Writing her own stories came as naturally as reading or writing, she doesn’t remember ever learning because that’s the way it always was. Inspiration came from everywhere; from watching way too much television to reading Roald Dahl, Stephen King, and Agatha Christie, even from a young age.

So how does she manage to balance everything in her life with creative writing? “The short answer is I don’t,” she sighs, “And it weighs on you to have the things you want to work on that you can’t, but it’s really just finding a moment in between projects and deadlines where you can work.” Yet, writing finds a way to make time for itself. Amanda explains that even when she’s not actively working on a project, she’s still making progress. Just by existing, going places, and listening to people talk you can get inspired. Now she’s working on her second manuscript and wondering how COVID-19 will impact the future of writing. Will stories now have to be set in a post COVID world, or will we get tired of that?

The labor of love that was Camino Beach took three years from idea to publication. After bringing a first page to a Meet the Agents event held at Webster, Amanda realized she was onto something. The agents loved the page and so she wrote the first chapter. The main writing took nine months and by the end neither the original first page or the first chapter had made it in. It then took months to get an agent who wanted to publish the book, but eventually she found one.

“Meanwhile, I decided I hated it and I rewrote the whole thing,” Amanda says. Like most writers she is never fully satisfied with her work. “Usually you go through and think, how could I have written this garbage? Then you get back to a point where you’re okay with it. You kind of have to find yourself on a good day and force yourself to stop. The good thing is I had a team who directed me. I admire someone who self publishes, and especially someone who self publishes and is successful. I don’t know how they do it because I needed a village.”

For a lot of writers getting published is the ultimate goal. It’s the mark of success, ultimate validation, and proof to others that your little hobby can pay off. For Amanda, it was different. She quotes Anne Lamott in Bird by Bird, “If you weren’t enough before publication, you won’t be enough after publication.” Getting published was only ever secondary to the work itself. “It’s about the story and the work. The work has to be enough on its own,” Amanda explains, “but publication is great if it lets you do the work or helps you feel justified in doing it.”

Though she remains proud of herself and her work, Amanda finds no validation in how well her novel was received. “I’m completely ambivalent of anybody’s opinion about the work,” she says. “It feels like it has no connection to me whatsoever. It leaves me absolutely cold.” She stays away from reading any reviews, and hasn’t even read the book herself. “I’ll talk about the story writing process for days, that’s tremendously rewarding. But the book itself? Those characters are dead to me, it’s done.”

Writing is a hobby for some and a part of life for others. For Amanda it is clearly the latter. So, why does she write? “I have to,” she responds, without a second of hesitation. “If I could choose not to, I would choose not to. I think it would be better for me to spend more time at the gym or making new recipes. But I have to. There’s something interesting about going down the rabbit hole of words. I used to think you have to do it all the time. I think that there are points in time where you write a lot and times when you’re not going to write, but you’ll come back to it because one day the story will come up and you’ll have to.”